A Synthetic Overview of the Collaborative Economy

The collaborative economy has been fast growing in recent years, and understanding its growth has been a challenge. However, what some may be unaware of is that there is a helpful guide to the collaborative economy, written by Michel Bauwens and others, which was produced in 2012. Bauwens reported that it was a team effort with important players including Nicolas Mendoza, Franco Iacomella, James Burke and Chris Pinchen, among others. The report is called: A Synthetic Overvierw of the Collaborative Economy.

The report is quite a read, standing at 350 pages, but it does provide a comprehensive overview of the situation. It includes topics on sharing, including crowdsourcing, cooperatives and open software, among others. Michael Bauwens was well qualified to prepare the report, given his key role as a director of the Foundation for Peer to Peer Alternatives. Of particular note, the study focuses on “community oriented and open business models which rely on more social forms of intellectual property.” This also includes focus on distributed infrastructures and networked computers, as well as collaborative consumption and peer to peer marketplaces.

One of the major transformation elements that is a theme throughout the work is the idea of the community and its interactions as being a key component in doing business. Organisations and individuals are less distinct than they were in the past, and consumers are no longer isolated from organisations. Rather, at this point everyone is interconnected in networks of economic participants. Another important aspect of transformation that has epitomised the collaborative economy and is expanded on in the report is the idea of digital reproduction and socialised creation of value. This means that the ideal of intellectual property becomes difficult to achieve, and perhaps, pointless, ultimately. There are argued to be more social forms of intellectual property emerging. 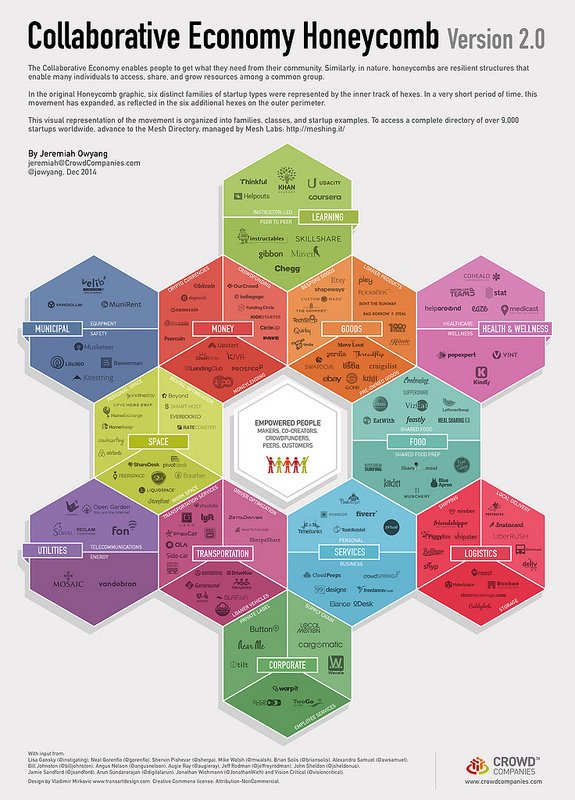 The work is broken down into six chapters. The first attempts to understand and provide an overview of a range of phenomena that have led to the development of the collaborative economy. This includes looking at the drivers and main concepts. The second assesses the dynamics of user innovation, examining how the corporate world has responded to that. One of the key concepts is the idea of active users, which have some degree replaced previous ideas of the consumer. Social media is explored in this chapter. The third section reviews hybrid and diagonal approaches to entrepreneurship looking at

Social media is explored in this chapter. The third section reviews hybrid and diagonal approaches to entrepreneurship looking at mutual use of skills and materials, for business benefit. Crowdsourcing and collaborative consumption are important topics investigated in this section of the report. Subsequently the work turns to looking at community centric production methods where communities and organisations work together to develop hybrid economies. The following section examines the infrastructure needed and developed in pursuit of the collaborative economy. Finally, the concept of open models for community business and monetisation are reviewed in greater depth.

One of the main points that comes out of the report is the fact that everything, all of the drivers that have led to the development of the collaborative economy have been very interrelated and interdependent. This has had the impact of reinforcing the development of the collaborative economy. All aspects are interrelated, such as the human relationships and the cooperation that is created with such models.

The report was commissioned by Orange Labs, with a goal of understanding and analysing changes in societies of all natures that could have an impact on the telecoms systems. Orange felt that collaborative practices were increasingly emerging as central in the economy. They saw these impacting value creation, sharing, consumption, production and innovation. As a result, Orange saw this impacting them within the mid to longer term and asked the Peer 2 Peer Foundation to help out by researching the area. They wanted to understand the players of the collaborative economy, as well as their objectives, approaches to collaboration and sharing, activities of work as well as the business models employed. The idea was for Orange to gain an understanding of the key actors and their initiatives, and this is what they contracted the Peer 2 Peer Foundation to do. The report was considered to be a success in this regard, particularly given its very comprehensive nature. For this reason alone, it is worth interested parties taking the time to have a read.

This site uses Akismet to reduce spam. Learn how your comment data is processed.

The events and ticket company  promotes local and international Corporate events and provides (online) tickets sales for these events.

VISIT OUR OTHER SITES

Events&Tickets.co is a product of The Business Connection BV .